Madaces » E-books » A History of American Sports in 100 Objects

A History of American Sports in 100 Objects 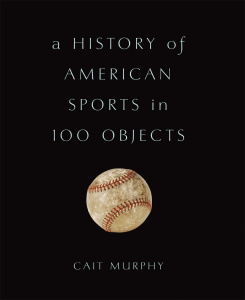 Descirption: What artifact best captures the spirit of American sports? The bat Babe Ruth used to hit his allegedly called shot, or the ball on which Pete Rose wrote, I'm sorry I bet on baseball"? Could it be Lance Armstrong's red-white-and-blue bike, now tarnished by doping and hubris? Or perhaps its ancestor, the nineteenth-century safety bicycle that opened an avenue of previously unknown freedom to women? The jerseys of rivals Larry Bird and Magic Johnson? Or the handball that Abraham Lincoln threw against a wall as he waited for ne of his presidential nomination?
From nearly forgotten heroes like Tad Lucas (rodeo) and Tommy Kono (weightlifting) to celebrities like Amelia Earhart, Muhammad Ali, and Michael Phelps, Cait Murphy tells the stories of the people, events, and things that have forged the epic of American sports, in both its splendor and its squalor. Stories of heroism and triumph rub up against tales of discrimination and cheating. These objects tell much more than...