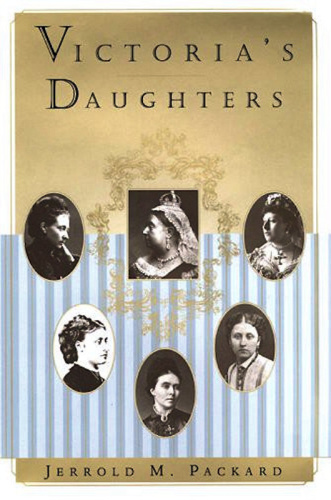 Descirption: The story of five women who shared one of the most extraordinary and privileged sisterhoods of all time.
Vicky, Alice, Helena, and Beatrice were historically unique sisters, born to a sovereign who ruled over a quarter of the earth's people and who gave her name to an era: Queen Victoria. Two of these princesses would themselves produce children of immense consequence. All five would curiously come to share many of the social restrictions and familial machinations borne by nineteenth-century women of less-exulted class.
Victoria and Albert's precocious firstborn child, Vicky, wed a Prussian prince in a political match her high-minded father hoped would bring about a more liberal Anglo-German order. That vision met with disaster when Vicky's son Wilhelm-- to be known as Kaiser Wilhelm-- turned against both England and his mother, keeping her out of the public eye for the rest of her life. Gentle, quiet Alice had a happier marriage, one that produced Alexandra, later to become Tsarina of Russia, and yet another Victoria, whose union with a Battenberg prince was to found the present Mountbatten clan. However, she suffered from melancholia and died at age thirty-five of what appears to have been a deliberate, grief-fueled exposure to the diphtheria germs that had carried away her youngest daughter. Middle child Helena struggled against obesity and drug addition but was to have lasting effect as Albert's literary executor. By contrast, her glittering and at times scandalous sister Louise, the most beautiful of the five siblings, escaped the claustrophobic stodginess of the European royal courts by marrying a handsome Scottish commoner, who became governor general of Canada, and eventually settled into artistic salon life as a respected sculptor. And as the baby of the royal brood of nine, rebelling only briefly to forge a short-lived marriage, Beatrice lived under the thumb of her mother as a kind of personal secretary until the queen's death.
Principally researched at the houses and palaces of its five subjects in London, Scotland, Berlin, Darmstadt, and Ottawa-- and entertainingly written by an experienced biographer whose last book concerned Victoria's final days-- Victoria's Daughters closely examines a generation of royal women who were dominated by their mother, married off as much for political advantage as for love, and finally passed over entirely with the accession of their n0 brother Bertie to the throne. Packard provides valuable insights into their complex, oft-tragic lives as daughters of their time.
**

Amazon.com Review
Incisive character studies of Queen Victoria's five daughters provide the framework for a lively survey of 19th-century European history. With three brothers securing the English throne, the princesses' royal duty was to further Britain's interests through marriage. Vivacious, intelligent Vicky (1840-1901), the spoiled eldest, had a happy union with Hohenzollern prince Frederick William, though her liberal vie were unpopular in Prussia and vehemently resisted by her son Willy, who eventually became the emperor of Germany. Sensitive, altruistic Alice (1843-78); dutiful, dull Lenchen (1846-1923); and shy baby sister Beatrice (1857-1944) all married minor German royalty--though Beatrice, intended to be her domineering mother's spinster companion, didn't marry until she was 28 and continued to live in England at Victoria's beck and call. Centuries-old custom dictated that princesses must not wed subjects, but artistic, rebellious Louise (1848-1939) married a Scottish nobleman anyway and managed to lead a slightly less restricted life than her sisters, particularly as a strong supporter of charitable organizations for women. Jerrold Packard, a veteran historian-biographer with six previous books to his credit, spins an enjoyably old-fashioned narrative emphasizing personal relationships among Europe's royalty and their impact on political developments. --Wendy Smith

Queen Victoria and Prince Albert had nine children?five of them daughters?and 40 grandchildren. In this engaging group biography, Packard (Farewell in Splendor) writes about scores of lives and several generations of this fecund couple's progeny?which is why the book is best devoured in small bites and why the comprehensive list of "Principal Characters" is indispensable. As a family, the V&As make for a story as dramatic as any fictional saga, but Packard also sho real sympathy and affection for these royal individuals, including the vastly complicated Queen Victoria herself. Packard combed the daily correspondence the sovereign required of her eldest daughter, Vicky, as well as letters, journals, memoirs and biographies of the other principals involved. In addition, his loving (or disparaging) descriptions of the five daughters' residences in London, Argyll, Berlin, Darmstadt and Ottowa reflect his eager research. History was no mere backdrop to these lives: Vicky's eldest child, Willy, grew up to become Kaiser Wilhelm II, to her great despair, and Alice's daughter Alexandra married Tsar Nicholas II. Packard's narrative is accessible, unpretentious and solidly written (except for one particularly bad pun on a widow's peak). He manages to treat historical events succinctly while emphasizing the princesses' individual lives and family relationships, their talents in music and art, their patronage of schools and hospitals and their pioneering advocacy of women's education and employment.
Copyright 1998 Reed Business Information, Inc.